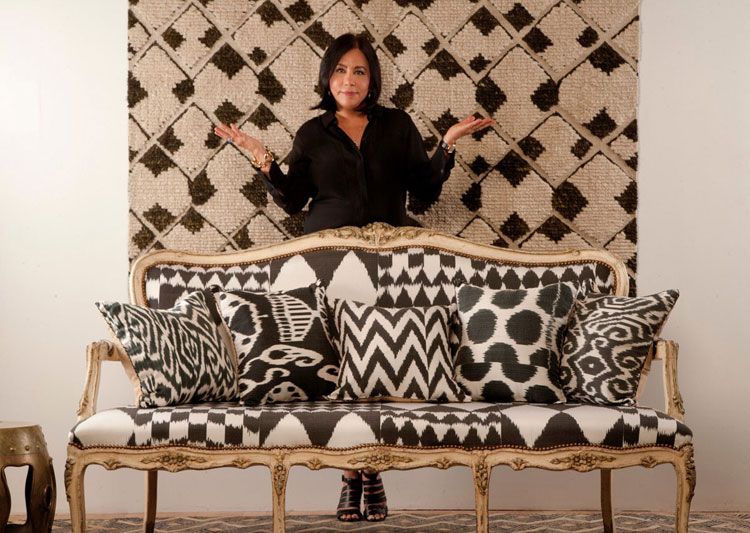 For most artists, the holy grail of galleries is the Louvre. Or, for a New York City-based artist like Madeline Weinrib, it makes sense that a career-defining moment would be having your work shown at the Met. Or perhaps the MOMA or the Guggenheim. Still, when Madeline is asked where she would want her work displayed if she could pick anywhere in the world, her answer isn’t any of the above. In fact, it’s underground.

“Artists have been commissioned by New York City to design subway stops, and I would love to design one someday,” says the painter turned successful textiles designer. “I haven’t had the time to put this into motion because I’m so busy, but it’s definitely something I want to do.”

Although Madeline’s work can’t yet be seen on your commute (unless you’re on your phone shopping at www.madelineweinrib.com) her pieces can be seen in prestigious showrooms everywhere from New York to Mexico and Portugal. She’s been designing since 1998 and running her own business since 2004. Most recently, she’s collaborated with Mecox on an online pop-up shop and an in-store pop-up at Mecox Palm Beach. From now through February, shoppers can pick up some of her favorite pillows, trays, cashmere throws and linen tablecloths and placemats—all curated by Madeline for Mecox.

“I’ve been a fan of Mecox ever since I started going out to the Hamptons 20 years ago,” says the native New Yorker who says she can’t imagine living anywhere but New York. Despite feeling at home in the city, Madeline is an avid traveler who readily admits one of the most rewarding aspects of her job is working with artisans and getting to know other cultures so intimately. Her most recent passport stamp is from Morocco where she picked up beautiful votives and a hand-painted tabletop that can be purchased in the pop-ups. Rounding out her list of foreign finds are handbags from Colombia, antique suzanis from Central Asia and vintage treasures from India.

India is especially dear to the designer. In 1999, it’s where she was introduced to Project Mala, a charity she now supports through her rug business. “Project Mala builds schools in the carpet-weaving region of India,” says Madeline. “They also provide breakfast, lunch and medical care for the students. I’ve visited the schools many times over the years and I’ve seen them grow.” In addition to India, Madeline has her rugs made in Morocco, Nepal, Pakistan and Turkey. “They’re all hand-woven, but each is made differently as the culture has its own technique.”

The designer also approaches naming of her pieces differently. “The process is never the same,” she begins, “It depends on the piece and what is going on in my life at that moment.” For example, she refers to a rug she named Endless because she felt it could go on forever. “A great placement for Endless would be an airport,” she notes. “Most airports are large in scale and they can feel like they go on forever.”

When asked what makes her feel most alive, Madeline has the kind of answer you’d expect from an artist. “Being creative. I think when people are engaged in the creative process, their minds are active and alive,” she says. “It’s very exciting when you have a good idea and can see it through.” She always knew she wanted to be an artist, and if that wasn’t an option, she’d be a chef. “I’ve always loved to cook. The whole process—from going to the market to serving beautiful platters of food—is very therapeutic.”

If any woman would be capable of putting together a six-course feast and serving it on an elaborate table setting she designed herself, it would be Madeline Weinrib.