At Mecox we are dedicated to achieving an overall balance between the indoor and outdoor living environment. At any one of the eight Mecox emporiums, one can always expect a fine selection of home and garden furnishings, united by an unwavering insistence to quality, texture and form. Whether it’s spectacular one of a kind antiques, unusual re-editions or our own classic Mecox designs, assuredly it’s of the very best the world has to offer.

Our flagship emporium opened in the village of Southampton, New York in the spring of 1996. Presently Mecox can be found in eight locations: Southampon, Manhattan, West Palm Beach, Los Angeles, Dallas, Houston and most recently Pittsburgh.

History of the name Mecox Gardens

For those familiar with the east end of Long Island, the natural beauty of the coastal plain is enhanced by the many villages and hamlets that date back to the founding, in 1640, of the first settlement called Southampton. One of the original eight settlers was Edward Howell who came from Boston to Long Island. It was Howell who came in 1640 upon the tiny Indian settlement called “Mecox”, a name taken from the Shinnecock Indians meaning “flat or plain country”. He announced he would build a mill for grinding grain, rye, and wheat into flour. The colonists expected him to construct a “windmill”, but he had a different idea. The land he selected would include a stream that emptied into Mecox Bay. There, as settlers watched, Howell built his mill. Hundreds of years later, the mill still stands as a historic landmark in Water Mill, New York. Its surrounding waters are called Mecox Bay which is where our name, Mecox Gardens is derived.

History of Our Stores

Mac Hoak moved to New York City in 1984 after growing up in North Carolina. With an undergraduate degree in economics from The University of North Carolina and an MBA from The University of Virginia, the obvious path was a career in banking. After ten years in finance, Mr. Hoak decided to follow his passion for antiques, design and fine furniture. He opened the first flagship Mecox Gardens in 1996 in Southampton, New York. Slowly, over several years, Mecox expanded, reaching out to new customers in Palm Beach, New York City, East Hampton (closed 2017), Los Angeles, Chicago (closed 2015), Dallas, Houston and Pittsburgh.

Each Mecox location is stylistically united by a foundational “Mecox look”. However, every local store team adds their own personal design style and local flavor.

Opening in 1996, Southampton is the founding location of Mecox Gardens which house our corporate offices. Situated on two acres of a former garden center, the expansive grounds and charming rural architecture, help guide the Mecox philosophy of taking inspiration from both exterior and interior. Attracting Hamptons and New York City based interior designers, our original location has evolved over the years and now includes our largest display of outdoor garden vignettes, showcasing outdoor furniture, garden ornaments and planters, and some select boxwoods. Mecox Southampton’s unique interior space houses our signature home furnishings, complemented by a wide selection of decorative accessories and local fine art. In the spring and summer seasons, Mecox Southampton’s retail floor extends to the great outdoors. Beautiful landscaping provides the perfect backdrop to showcase new product for outdoor living. This, in combination with the ever-rotating interior offerings, provides a special visual experience for customers and visitors. 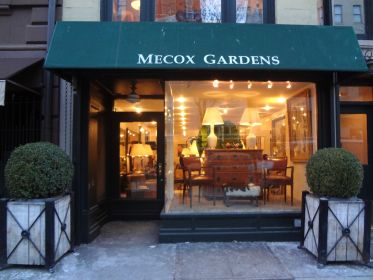 Opening during our second holiday season, in what was supposed to be a “temporary” Upper East side location. The relatively small 1,000 square feet of floor space proved to be just the right size to setup permanent residence. Mecox NYC has been changing its floor merchandise weekly, every Wednesday, since 1998. In 2008, we expanded upstairs and even currently have a small but beautiful outdoor terrace – the perfect New York pied-a-terre environment! 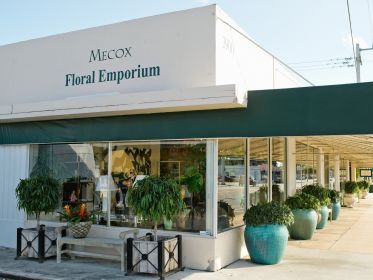 In 2000, Mecox decided to follow our many New York based customers to Palm Beach for the winter. Once again, a small “temporary” space – this time on Worth Avenue proved a perfect chance to showcase the Mecox look. Within a year a permanent space anchored the western end of the avenue. After 10 years on Worth, the need for more space prompted a move “across the bridge” to West Palm and the antique row of South Dixie Highway. This tripled our floor space and allowed us to better showcase our ever changing and eclectic mix of antiques and new home furnishings. 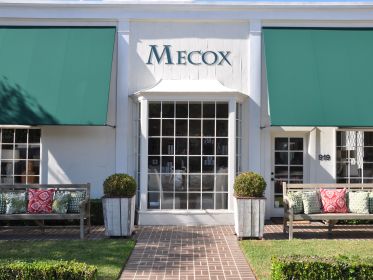 The allure of the west coast and the incredible design corridor along La Cienega Blvd in west Los Angles proved too much for Mecox to resist. In 2003 Mecox LA opened in a free standing, 1920’s building with one of the few grass “front yards” along La Cienega Blvd. Since opening, the entire five block area has become a destination for the interior design trade for the entire west coast. With a beautiful mix of antique and eclectic home design stores, it has been the perfect fit for Mecox. As our lone outpost on the west coast, Mecox Los Angeles has reached out beyond the City of Angels to San Francisco, San Diego and beyond.

The need to fill a regional void in the booming Southwest prompted our entry into Texas – and admittedly to satisfy our desire for great Mexican food!  Finding the perfect and largest location yet, the Knox Henderson design district was the perfect solution. Mecox Dallas opened its doors in 2007.  Boasting over 6,000 square feet of interior space, Mecox successfully introduced our look, in a big way, to the sophisticated interior design community of Dallas. 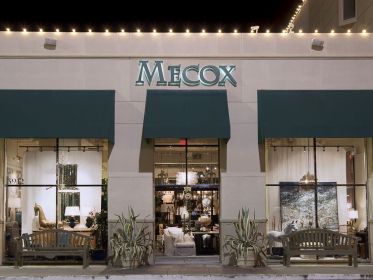 Everything is bigger in Texas and Houston provided Mecox its largest emporium yet when we opened in late 2008 in arguably the finest large outdoor retail center in the city – Highland Village. This location was a new test for Mecox, by locating our rather unique mix of home and garden furnishings in a more traditional retail shopping environment, many of our neighbors are national retailers. The experiment has been fantastic as Houston, Texas has embraced the largest Mecox store of over 8,000 square feet with open arms. 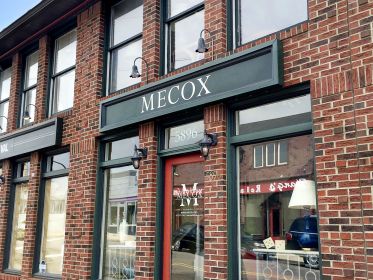 Opening its 8th location on Ellsworth Avenue in the historic district of Shadyside located in the heart of Pittsburgh in the fall of 2016 also marked 20 years since the opening of the very first Mecox Gardens location in Southampton in 1996. The 1,800 square foot shop, located in a two- story townhouse is part of a restored promenade in the historic Shadyside neighborhood that is experiencing somewhat of a retail renaissance. This area offers a variety of stores, boutiques and restaurants and only a few blocks away are Victorian mansions and charming Georgian style homes, many of which were once owned by some of the founding US industrialist families. 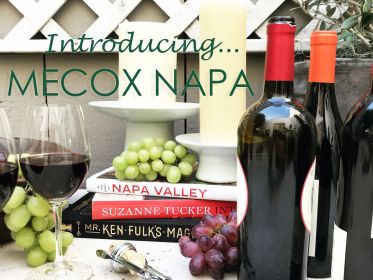 First Street Napa – a 325,000-square-foot mixed-use development in the heart of Downtown Napa that will encompass 45 retail shops and restaurants, new creative office space, and the 183-room Archer Hotel Napa – is pleased to announce the April 2018 opening of Mecox’s eighth store and its first Northern California location at 1214 First Street, adjacent to State & First by Maris Collective and below Archer Hotel Napa. Offering a range of products suited to indoor and outdoor living environments, the 2,500-square-foot emporium will feature a broad selection of home and garden furnishings, barware and glassware, one-of-a-kind antiques, and unique tabletop and bar accessories.

At Mecox we are dedicated to achieving an overall balance between the indoor and outdoor living environment.

At any one of the eight Mecox emporiums, one can always expect a fine selection of home and garden furnishings, united by an unwavering insistence to quality, texture and form.

Whether it’s spectacular one of a kind antiques, unusual re-editions or our own classic Mecox designs, assuredly it’s of the very best the world has to offer.
Our flagship emporium opened in the village of Southampton, New York in the spring of 1996. Presently Mecox can be found in seven locations: Dallas, Houston, Los Angeles New York City, Palm Beach, and Southampton.

Each Mecox Team in our eight locations supports a locally based charity of its choice through a variety of volunteer, financial and emotional efforts. We invite all of our Mecox customers and friends to join us and also make a donation to any of our favorite charities by clicking the links below.