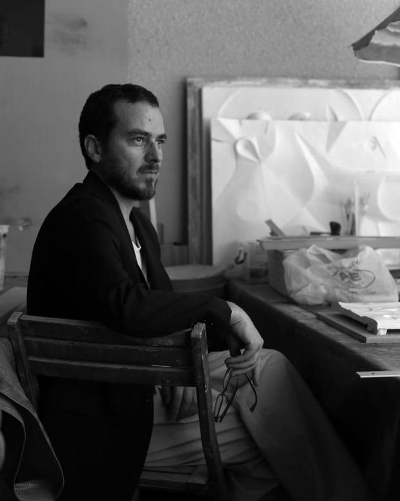 His resume reads like a pop-culture themed list of Hollywood blockbusters: The Lost World: Jurassic Park, Men in Black and Star Wars: Episode I, just to name a few. Kids are also familiar with his work: Shrek, Madagascar and most recently, Tangled. In fact, Patrick Bonneau says Tangled was his favorite film to work on. “The amount of talent I was working with every day was a unique experience.”

For 22 years, Patrick Bonneau was an insider in the animation industry, working for two of its biggest players—Disney and DreamWorks. His job description, in his own words, was basically “creating virtual lives.” Today, however, he’s one of Mecox Los Angeles’ newest featured artists, a sculptor who describes his current career of four years as “playing with shapes and lights.” The fact Patrick is still in the field of creative arts is no coincidence. He has roots in one of the most artistic places on the planet.

Born and raised in Paris, Patrick grew up studying art in the same city that influenced legends like Auguste Rodin, Vincent van Gogh, Henri Matisse, Edgar Degas and Pablo Picasso—one of Patrick’s biggest sources of inspiration. In the early ‘90s, Patrick studied Traditional and Computer Animation at Gobelins School of the Image. Other notable Gobelins alumni have worked on films like Despicable Me, Shark Tale and The Road to El Dorado. After graduating, Patrick moved to San Francisco where he was hired to work at Industrial Light & Magic, a visual effects company started by none other than the biggest name in the business: George Lucas. But it wasn’t working on Mr. Lucas’ iconic films that makes Patrick, now an L.A. resident, miss the Bay Area the most. “My daughter was born there so it’s a very special place for me,” Patrick says with more than a trace of nostalgia. “I’d love to go back, maybe the north part like Marin County.”

For now, Patrick is happy in Southern California where he can see his reliefs for sale in Mecox Los Angeles. When it comes to his sculptures, Patrick sums them up in three words: force, balance and movement. “My art is abstract shapes and lines fighting for balance.” He realizes everyone may not understand his work, but that’s okay. “There’s nothing to understand,” insists Patrick. “Art is speechless communication, and in the case of abstract art, the interpretation is very personal from one person to another.”

View all products from Patrick Bonneau

Patrick’s initial masterpieces were typical of most six-year-olds his age. “I used to collect things and glue them together,” he remembers. Except, he was still doing this into his twenties. He’s also always had a sketchbook within arm’s reach. Today, all of his art is based on his sketches. When asked how he spends his free time, his answer shows just how much he loves his work. “I draw in my free time. I have two sketchbooks with many drawings I constantly rework to make them ‘better.’”

After spending two decades behind a computer screen, Patrick is happy to get his hands dirty making art. “Every artist needs a hand,” he says, “It’s the most precious tool.” When he can find adequate space, he plans on getting into stone carving—a medium he’s never dabbled in but has always wanted to try. Patrick is also fascinated with architecture, particularly Japanese architecture. He cites Japanese architect Tadao Ando as the first name that comes to mind when he thinks of the professionals on his collaboration bucket list. “I love Japanese art and architecture in general,” says Patrick. “I don’t really travel, I work a lot; but I’d love to go to Japan for sure.”

Patrick may not travel much, but he is taking time to visit his home country this summer. When asked where he’d have his work exhibited if he could have it shown in any gallery or museum in the world, his answer is France’s Maeght Foundation outside of Nice. For sculptors, the idea of having your work displayed alongside Ellsworth Kelly’s, Joan Miro’s and Marc Chagall’s is a very ambitious, perhaps unrealistic dream. But if anyone can dream that big, it’s probably Patrick. After all, he’s well-versed in the world of happily ever afters.